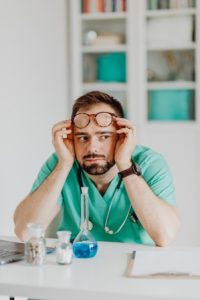 In any medical profession, patient care is the primary focal point. Physicians are held to an even higher standard, as they are expected to be not only knowledgeable but also compassionate and empathetic toward the needs of their patients. Still, there are certain moments that tend to dampen a physician-patient relationship, such as feeling judged or criticized by your physician.

So, what are some of the things patients hate about physicians?

1. Not being listened to.

When physicians are too busy to actually listen to what you have to say, they are ultimately preventing themselves from being able to help or treat you. No matter what the ailment, you should be able to take all necessary steps toward achieving your personal best health. Patients are often left feeling unheard, causing them to mistake their physician’s carelessness for lack of interest in their well-being.

While physicians are stocked full of invaluable information that can be the key to diagnosing your condition, a great bedside manner can leave you feeling more confident and secure in your treatment. Physicians who do not treat their patients as individuals, but merely as cases to be solved, can leave patients feeling uncared for and inferior to their physician’s knowledge.

3. Too much or too little information.

One of the most frustrating things for a patient is not being able to make a proper plan of action. Over-informative physicians, who provide unnecessary detail in their explanations, can leave patients confused and overwhelmed. On the other hand, under-informative doctors, who leave their patient’s in the dark about diagnosis and treatment plans, can leave them feeling powerless.

Patients often feel as though once they have been given a diagnosis, they have been placed on a shelf and forgotten about. Physicians not following up with their patients can leave them feeling as though they are being passed off to someone else.

5. Too much time spent on non-patient related things.

Are your physician’s office staff having an adoring conversation about their recent vacation while you wait for your checkup? It is likely that they are. Physicians who spend too much time talking to staff or other physicians can make their patients feel as though they are not important enough to spend the physician’s valuable time.

Truthfully, it doesn’t matter what industry you are discussing, sexual harassment is never appropriate. Patients should feel secure in the fact that their physician will treat them as a professional and no more. Being too physically or sexually attentive with your patients is not only unprofessional, but it is also dangerous for those affected.

The same principles that apply to customer satisfaction also apply to patient satisfaction. No matter what your profession, if you do not present yourself as a clean and conscientious individual, you will typically be received unkindly by those around you. Physicians who fail to properly groom themselves can leave their patients feeling as though their physician is neglecting them.

These are just ten of the many ways that physicians can upset their patients. Of course, there are more factors that determine a patient’s overall satisfaction with their physician than just these ten, but this list does give a nice foundation.